Sex Dog is back!!

Before the towers came down there was a dog identical to this but a little fatter who belonged to one of the guys who worked at the sex shop "Thunder Lingerie" on the next block. The dog would wander leashless, but he didn't have much energy and his belly barely cleared the ground anyway. He wore a black collar with metal spikes. We called him Sex Dog.

After the towers, obviously nothing was the same, slowly the street came back to live and Thunder Lingerie has been re-opened for a while now, but no Sex Dog.

Then yesterday I saw this dog wandering around in the middle of Rector Street, with people freaking out trying to get him out of traffic. Right now he's wandering the block and all the girls from Remi and the Pussycat are cooing at him. One of the commandos who guard (or whatever they do) the Deustchbank building asked me if it was my dog. I told him no, and he told me how he's been seeing this dog run around all over the place, oblivious to danger, scampering away from anyone who tries to touch him.

Part of me wonders if maybe this dog is just lost, or maybe it really is Sex Dog, and he went to where he knew, this block of Greenwhich Street.

But most of me thinks this is Sex Dog and his owner is inside Thunder Lingerie watching boxing on the small black and white TV in the back, and he's enjoying reliving the good old days. 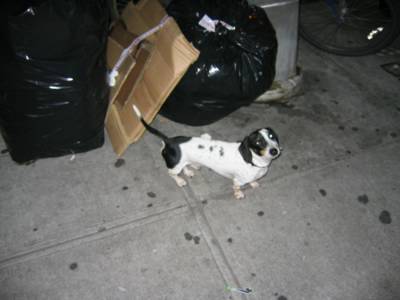