I read that there'd be one of those "die-ins" at Ground Zero at three, so I ran down the block to see what the deal was. But I was running late so I got there at maybe 15 or 20 past the hour and all I found was some old hippies. 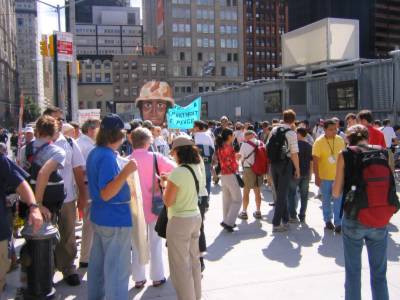 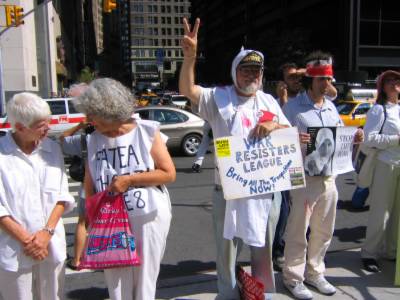 It wasn't until I saw news reports later in the day that I found out why I didn't find any die-in-ers:

"Officers encircled scores of demonstrators with orange netting at one afternoon protest, and authorities said 200 people would be arrested for blocking the sidewalk. Detained protesters were loaded onto an off-duty city bus.

The protest’s 500 demonstrators, a group called the War Resisters League, said they were staging a “death march” from the former site of the World Trade Center to Madison Square Garden, site of the convention. The arrests happened about a block from Ground Zero."

I wonder how long that operation took them to do. I was standing right there and saw/heard absolutely nothing. Even the cops were just hanging out looking bored. Could there really have been hundreds of arrests going on on the next block? Or was it all over in under 20 minutes? 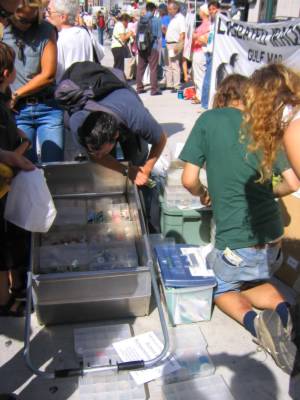 By the way, one thing I meant to mention about Sunday is that inspite of communist stereotypes surrounding protesters, they certainly do have the capitalist bug. Union Square is a regular t-shirt/button/protest junk market, and everywhere there are protesters there seems to be a guy selling buttons or something.