This was a pretty complicated event. The basic idea was to ring bells around Ground Zero. The plan, however, was a little more detailed. They rang for more than an hour, and the plan was that some sides of the site would stay silent while other would ring. Every two minutes it would change in a sort of song. What was really the case (to my ears) was that everyone rang their bells for an hour.

But that's not to say the whole thing didn't work. I was very skeptical that they'd get enough people to ring Ground Zero -that's a lot of ground to cover. But sure enough, even though there weren't quite enough people to stand shoulder to shoulder all the way around, I did a lap and there wasn't a single point when I couldn't hear bells ringing, even inside the WFC.

My observation was that there were two kinds of bell ringers there. One kind felt some kind of spiritual connection to bell ringing. They had their own chimes (for yoga or something?) and they rang with a specific cadence, sometimes with a sort of meditative look on their face. The other kind were people who just wanted to make noise by ringing a bell. Not that there's anything wrong with that. Go Johnny go. 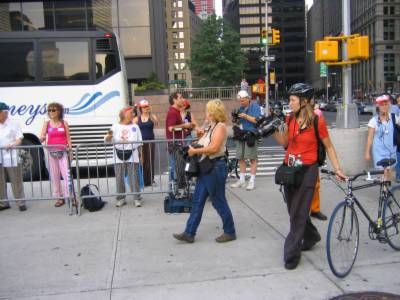 Media were everywhere for this one. Photographers, video, boom mics, interviews. Whoever orgainzed this was savvy. I reckon it helped that the thing was planned to happen at the same time as the nightly news. 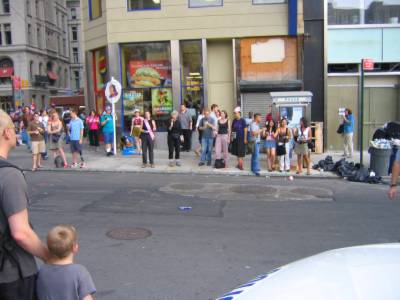 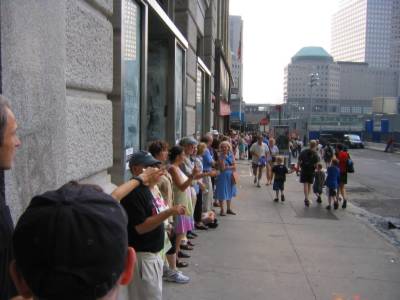 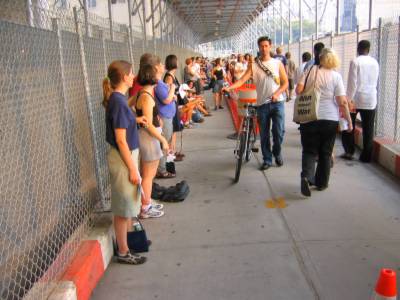 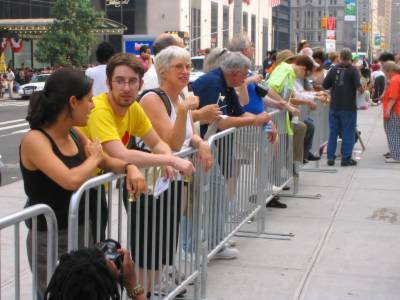 The way the city set up the barriers for this event worked out well. They had a fence running across the east side with the idea being that protestors would stand on one side of it so regular tourists/visitors to the site could still do so unmolested. The plan half worked, and it was still a bit of a hodge podge, but it wasn't mayhem, and it wasn't an insulting pen like they usually put demonstrators in, and I think the mood stayed more relaxed because of that. 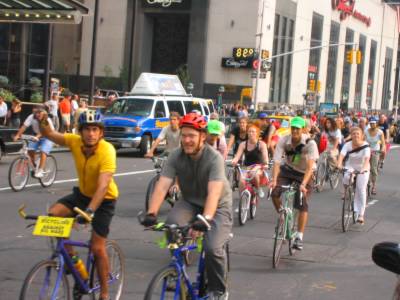 A contingent of Bicycles Against Oil Wars also rode by in the midst of all the ringing. Something I haven't heard any media point out yet is that those folks with the dayglow green hats are "legal observers." I guess the ACLU or someone is trying to make sure that the cops (and the protesters too I imagine) are keeping it legal. 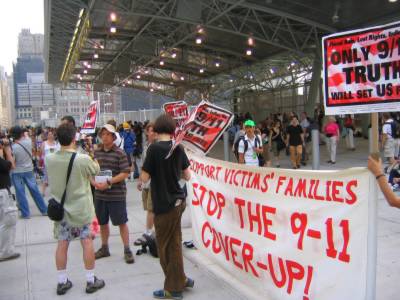 These 9/11 truth guys are there every few weeks. Frankly it seemed a little like they were trying to hijack an otherwise pleasant and positive and sane event, but then again, it was a bit of a circus under that PATH awning anyway -I think because it caught the sound of the bells, plus all the talking and interviews being done with the media and a police dog kept barking. 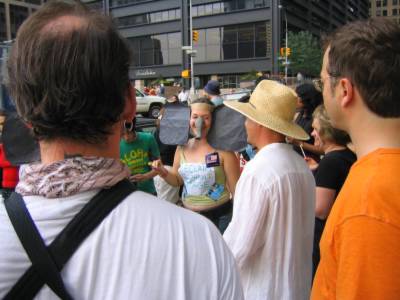 There were a few of these elephant girls ringing bells. Her sign says "Reclaim elephant image." By the time I was walking home there were quite a few cameras pointing at them. Wouldn't be surprised to see them again somewhere. 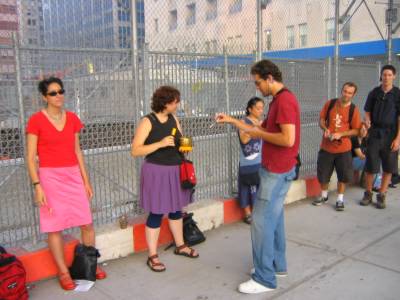 The sound of it all really was pretty remarkable. Not anything I'd want to buy on a CD, but still pretty unique. Consequently, I think every sound guy in the city was there was recording equipment. Little mics, boom mics, recording gadgets... 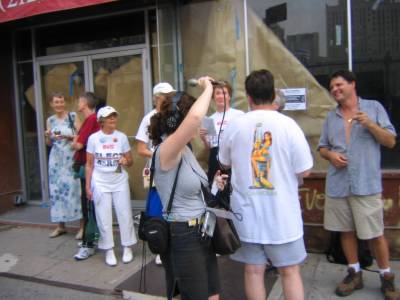 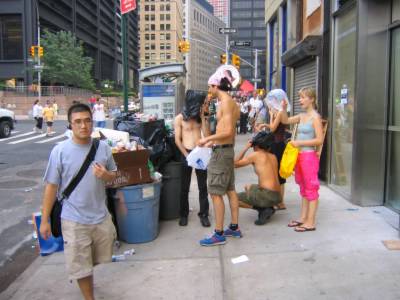 I don't know what these clowns were doing, but they looked furtive, you can see the one guy trying to crouch behind the garbage. It looks like they want to do some kind of Abu Ghraib recreation. I think protests and rallies and well, pretty much any crowded event is fun, but I'm not having any bullshit in my neighborhood, so I took a picture of them just in case.