When an emergency is no emergency

Q: When do you not mind that your own building is on fire?

A: When you live in Lower Manhattan.

4:30 a.m. this morning and I woke to the sound of firetrucks and emergency vehicles. They were close, a little to the east. My brain instantly put them at the stock exchange. The terrorists had struck in the middle of the night just to prove they could and now I was hearing emergency vehicles responding. I got out of bed and walked to the living room window, the sound of sirens getting louder.

What's odd is that when I looked out the window and realized that all the emergency vehicles were actually coming to MY building, not the stock exchange, I was actually relieved and went back to bed (after snapping a few shots.) Nothing to worry about, we're just on fire.

In spite of a huge number of trucks responding, I don't know if there was any real emergency. The trucks drove away relatively quickly and I never smelled smoke or anything like that. Of course, in a 35 story building, there could be a lot going on that I don't smell. I counted 5 vehicles responding, two ladders, two trucks, and one of those smaller SUV things.

There was probably more because I saw ten truck but not ladder ten, so they must have been around somewhere. Just after I took these photos I saw an engine go up Rector Street (Engine 4 I think), so it could be there were more trucks down around the Rector Street side of the building. 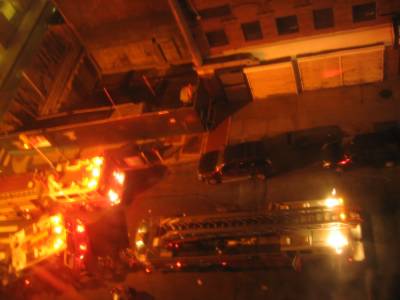 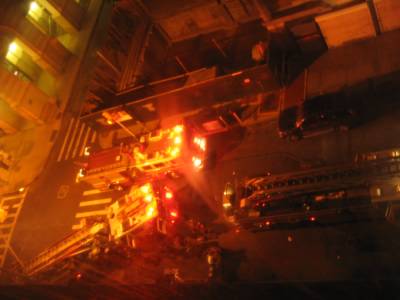 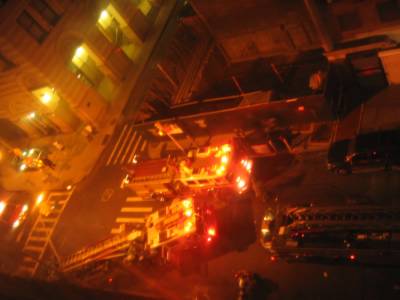