what's going on back there?

Neighbors who've been living down here for a couple years remember (scroll halfway down) George's & Sons Lunch diner that was on the corner of Greenwich and Rector. And whether you remember George's or not, you may have wondered what's going on behind those boards. Look no further. :)

I have some old paper pictures of the horrible day they had to tear the place down. Somehow (I have my theories, but suffice it to say... somehow) one entire wall of the two story building started to pull away. There was no way to salvage the building. It was a horrible sight to watch as George Koulmentas and his daughters wept as a giant claw machine tore the building to pieces and packed it into the foundation.

It sat like that for a while, just a dirt lot.

Then, finally a change. Someone came and dug the dirt away from the foundation walls. It looked like they were checking the extent of the damage from the crack that brought the building down. A few months after that, they dug the dirt and debris out. And a few months after that, they poured some new cement and ... well, they made it look like the photos below and that's how it's been for quite a while now. This morning there was a big drill truck doing something, but I can't see any changes from up here.

Anyway, as disappointing as the slow contruction process is, what's heartening is that someone has already painted the kitchen on the wall. I don't know if you can make it out in these photos, but across the back wall is a life-sized diagram that reads:

George vowed to be back. If anyone knows what the schedule is for when I'll be able to get a burger from one of those burners, let me know. 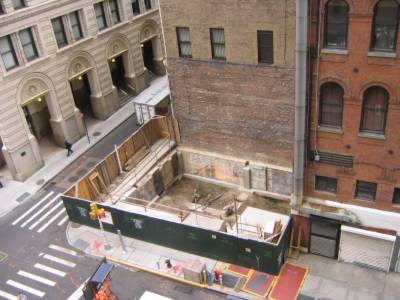 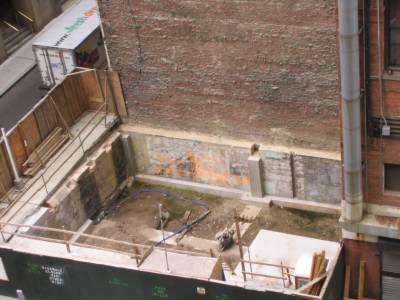 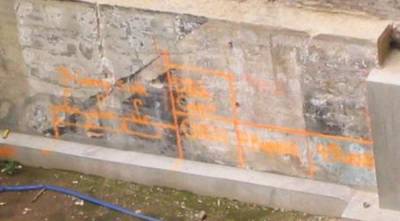