It hits the fan

Determined not to miss the action again, I went up to Union Square to see what was going on. There was a definite "something happening here" feeling in the park, but it seemed mostly like everyone was waiting for something. Not a lot of direction. 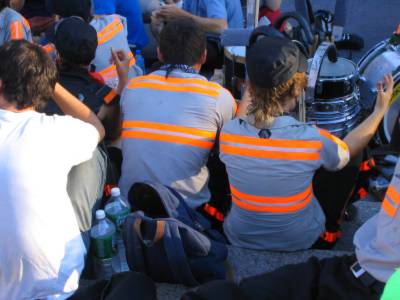 These folks were waiting for something while wearing cool uniforms. 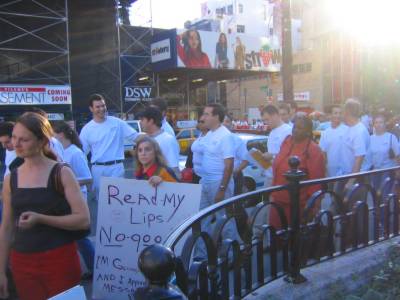 There were big groups of NYU "first day at school" tours wearing the same t-shirt. I can't imagine coming to Union Square today for a first day of school tour. 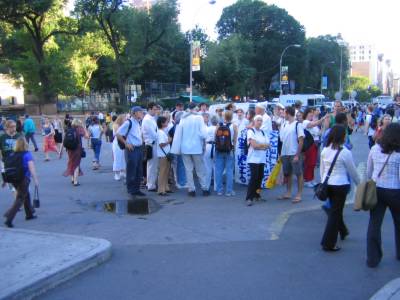 Restless, I decided to move up to Madison Square Park where I'd read folks were meeting at 6. It was already after 6, but I thought I'd catch up with whatever might be going on. These folks stood on the north end of Union Square looking a little uncertain. 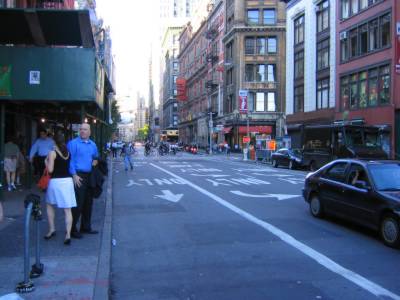 Of course, it may have been the huge police presence up Broadway that made them feel that way. Clearly the police knew something was about to happen as well. The energy of it was hanging in the air (or was that the helicopters?) 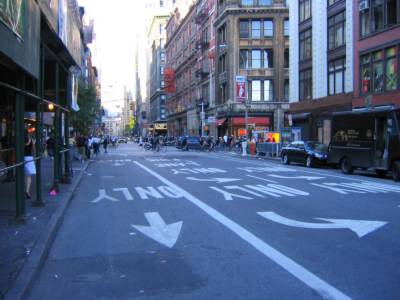 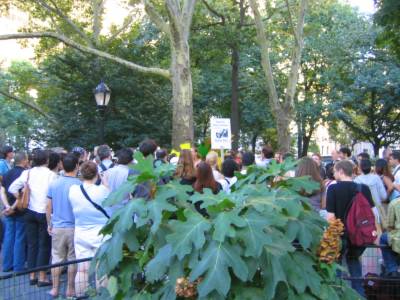 At Madison Square Park there wasn't much happening either. Just some folks hanging around and clearly something was going to happen, but it wasn't clear what. I sat on a bench and read the paper for a bit until I felt a general shift in the crowd. Folks were gathering around a woman who was saying that there were two gathering places, 2nd ave & 15th, and the southwest corner of Union Square. She said we should go now, but only in small groups. One guys asked if she knew the route that would be taken. She answered that she didn't think even the people who would be marching knew what route they would take but that they had text messagers of some kind.

So I left, sending this by pager. 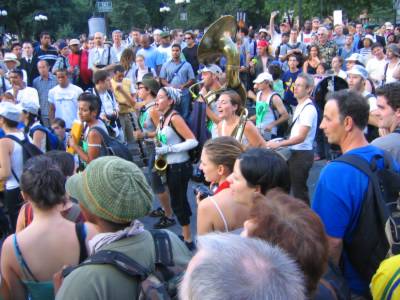 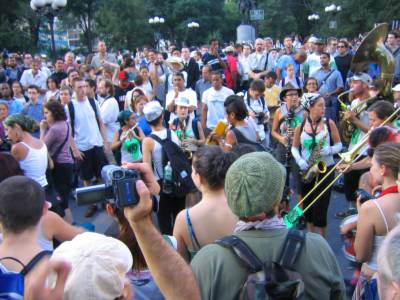 Back at Union Square there was a band playing real instruments (as opposed to those drum circles that seem to be everywhere). Folks were having a good time; note the smiles. The cops were attentive, but not really too wired. Still there was a charge of energy to the scene. There's something happening here. 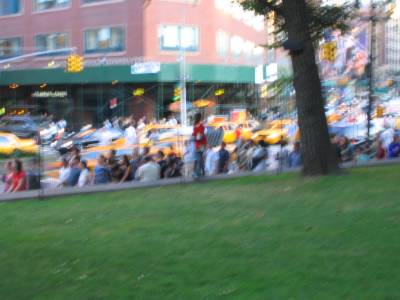 I stood at the Southeast corner of the park, reading the paper and waiting for something to take shape. Suddenly I realized that the music had gone quiet and the entire park felt like it was shifting north. It's hard to explain how you can feel that something is going on and it's "over there" but it's not clear where exactly. I took the above blurry shot as a fast-walked north through the park. Everyone was walking north. 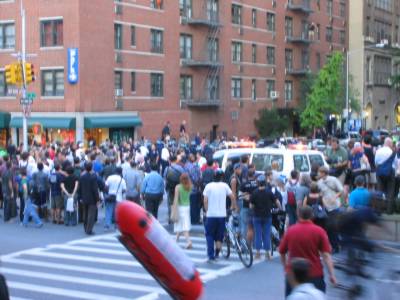 They were walking to 16th Street. Apparently the marching band and its followers weren't able to take the direct route they'd planned (I'm pretty sure MSG was the ultimate goal) so they took an alternative route. What ended up happening is that when they got on 16th street the cops sealed both ends of the block and arrested them all-- or at least, they held everyone there, let the folks with press passes go, and were going through the process of arresting everyone when I left around 8. 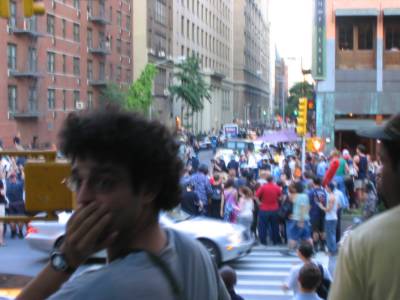 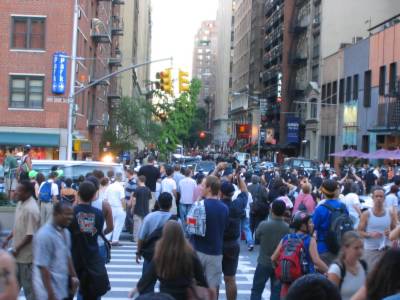 At first it wasn't clear what was going to happen. We all just watched anxiously as the band moved east and the cops moved west. It looked like the cops were going to just divert them to the sidewalks or something, to get them out of the street. Instead there was a stand-off and cops ran for their riot gear. 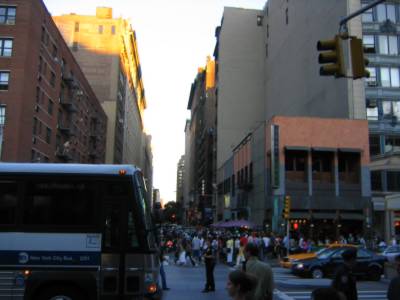 There was a huge crowd watching this all happen, getting pretty angry. The traffic cop tried to get the bus to stop in front of everyone to block the view. 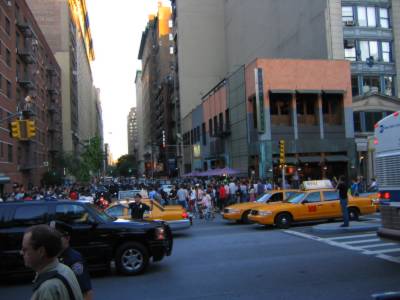 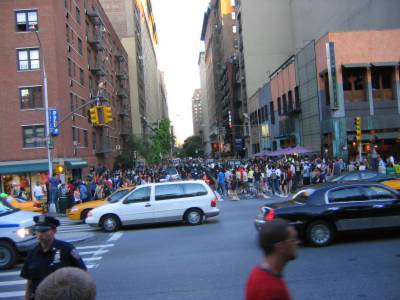 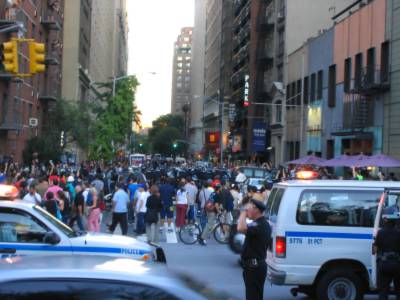 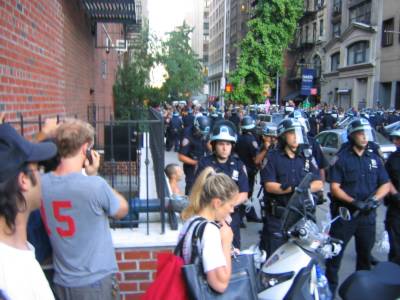 Once I figured out I could get closer I did. There's one of the first arrests sitting on the sidewalk. Eventually they put a batch of them in a van, then another van came and more went in. I think they were on the third van by the time I left, but there were still a lot of people penned in. 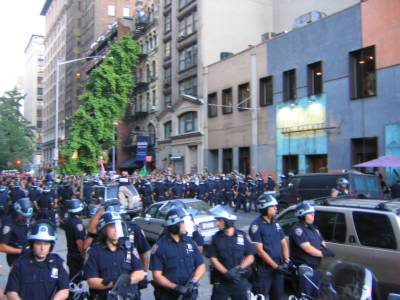 The number of cops was really amazing. Even when it seemed like the guys in riot gear had things locked down, a whole fleet of bicycle cops came, and I could see a police truck at the other end of the street, so I assume there were troops coming in on that end as well. 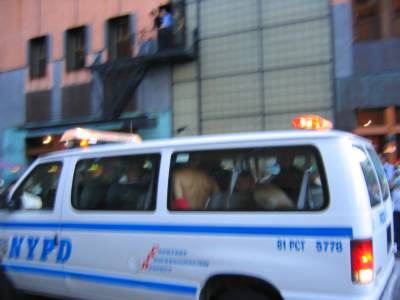 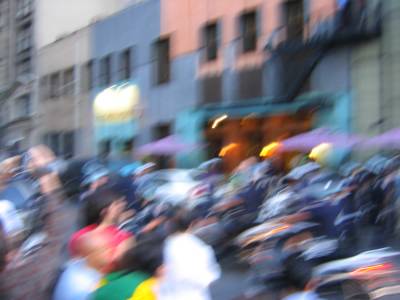 When I left there was a shrill punk-rock girl trying to get people to fight with the cops and my camera battery was cold dead and night was setting fast.