I don't know what I was thinking, but I went out the other day without my camera and of course in the space of a few blocks I immediately regretted it.

I'd seen the sign for Taino Cigars on Nassau between Fulton and Ann a few weeks ago but they weren't open, so when I saw the lights on and the gate up the other day I went in. They have a familiar selection... Macanudo, Ashton, C.A.O., and some Romeo y Julietta boxes that looked interesting. But of course, the whole point is that they roll their own there, so you want to try the house brand.

The nice guy working there, Jorge, told me they have one case of Connecticut wrapper, and the other case is Equadoran. After learning my preference for Maduro, he recommended the robusto, which sells for $5. He says guys buy those like crazy. (That's the darker one in the photo below.) But since my shape preference is somewhat uncommon perfecto, I also picked up the unbanded one (just rolled) for $3. Technically it's a diamente (according to Jorge) but the principle is the same, the cherry stays small, the burn is cooler, the smoke is longer. 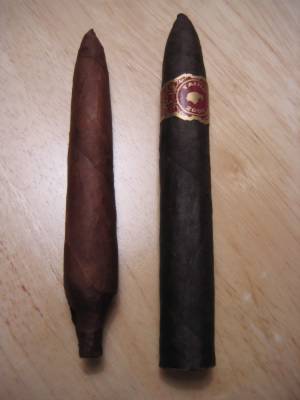 I'm not actually much of a cigar smoker so it'll take me a while to get around to these. Frankly that robusto looks a little intimidating. I'll probably be able to give a little review by autumn.

Of course, there already is a local cigar shop, Quisqueyana cigars, with a shop on Church and a smoking lounge on Maiden Lane. And they use to have a lounge up on like 18th near Broadway, but I think that closed. I like the lounge, and they have these cool HUGE cigar bands, but I think the smoke it too harsh. I still have enough taste in my mouth that I prefer something a little more mild. 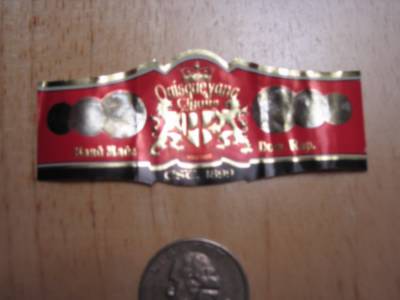 Of course, if you're into downtown smoking lounges, you definitely have to go stew in the Barclay Rex on Broad Street. A nice big people watching window, nice leather chairs, even a coffee/espresso machine (although I didn't make use of that). The only bad part is that if you don't work over there it's hard to catch them open. They still haven't made the adjustment to the fact that people actually live down here now. (That's ok though. Some of the people who live down here haven't made that adjustment yet either.)

robusto is very great cigar. if i would be there i will also recommend it to you. Romeo y Julietta is also nice. I will also suggest you to taste more cuban cigars.