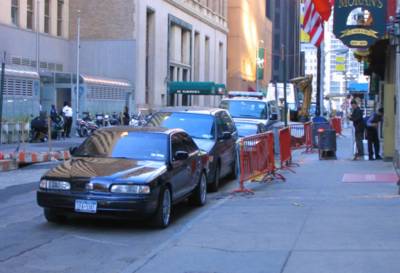 This one's hard to see but it's too funny not to post. This is Washington Street, south of the hole. On one side (right) of the street is a Buddhist temple where every now and then (I'm sure it's a regular interval, I just don't know what it is) they light a fire in a metal drum and drop in pieces of paper. I think the paper has prayers on it or something like that.

On the other side of the street, left, is a police outpost. Not a precinct, but a base where they keep traffic mopeds, etc. It's also a base for the Downtown Alliance. They have the exact same kind of metal drum, but theirs is turned sideways and cut in half with a hinged lid. In the photo (click to enlarge) you can see the lid is up in front of the cop in the dark blue shirt. He's cooking Keilbasa.

So two really different cultures are performing to very different rituals using the same tool at the same time on the same street. Only in New York.