I've mentioned The Battery Park Broadsheet here before and unfortunately they don't have a Web site, but this week's issue has some really good stuff in it. Including a little review of Chipolte, which is a chain of organic Mexican restaurants. I'm not sure how big a chain, but I know there are a few around. Basically all you can get there is a burrito. You tell them the meat (or not) and what other toppings, and you're out of there for $6.50.

And, my fellow Lower Manhattanites, they're located at 2 Broadway and they're open until 10pm EVERY DAY! Including weekends. This is huge. The nearest cheap quickie Mexican place is Chevy's, and that's gross. There's Mexican right across the street from me, and another one two blocks away (La Bomba) and while they're good, they're Mexico Mexican. At the place across the street, when you order nachos you get like 6 round nachos laying flat on a place with a little bit of topping. At Chipolte you can order a side of nachos that come in a basket in a pile. Chipolte is like Benny's Mexican. I don't know how else to explain it.

And P.S. we were there on a Sunday and they were doing a pretty good business with lots of foot traffic (people watching) going by. The 24/7-ing of Lower Manhattan is on the march. 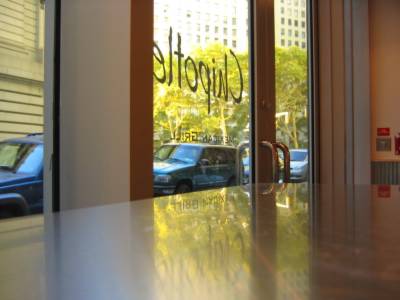 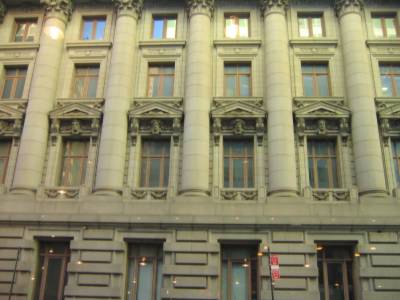 The view from the counter at Broadway. (that's the Native American Museum)

Update: Perhaps I should have named this "McChipolte." (see comments) So much for shopping local. :(

MacDonald's owns a 90% share in the company (if that's any indicator as to how large the chain in and will become.

I think most people would do the same when they are headed with the situation.