Bassman in the Subway 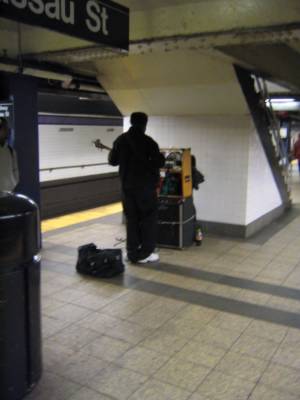 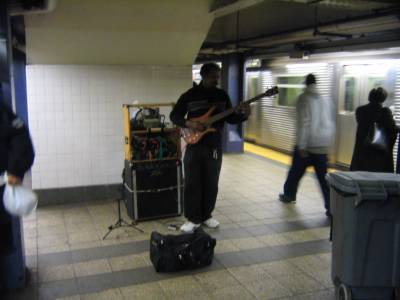 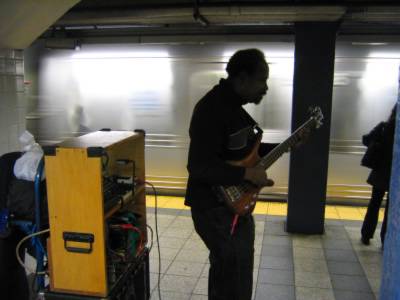 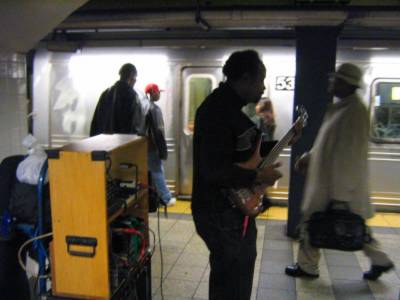 Way back what seems like a million years ago, when the N/R was closed, the 1/9 was crushed, and the E was... "you can't get there from here," I used to take the A or C from Fulton to get uptown for work. There were times when there'd be a singing guy who was so moving and soulful that I would actually miss trains just to stand there and keep listening. He did a version of "Born by the River (Change gonna come) that was positively haunting. And one time when I was watching him, this woman kicked his little bag for tips, scattering change everywhere and she didn't say sorry or anything and he looked at her with incredultiy and said more to himself than to her or anyone around, "That's OK, I'm not mad." Quite a guy.

Anway, coming home today there was a different guy in the same spot. A cool bass thumping groover. Quite a set up you see there, he's got an amp, a car battery, a drum machine, a mixer, a few pedal effects, and one floor pedal that starts the drum machine, so he can play an intro and have the drum machine join him instead of the other way around.

Again I stood as trains came and went.

(And again I have a problem with bright light confusing the camera and making the low light areas too dark. I still hate using the flash, but in this case it might have been necessary.)