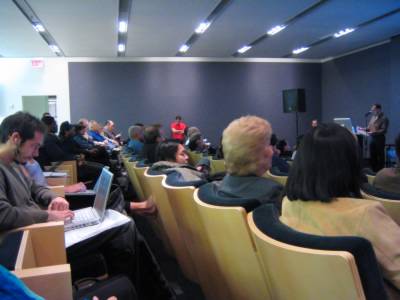 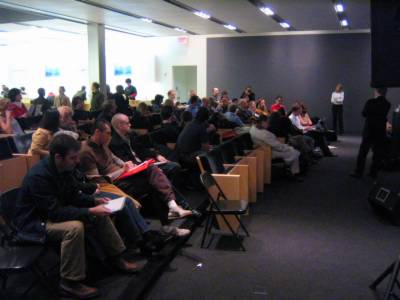 I don't have much to compare it to, but I'd say there was a pretty good turnout at the Apple store this evening. On the whole I enjoyed the event, if for no more specific reason than that it was a lot of people gathered to talk about something I'm interested in. Some criticisms: I had already looked up the participating photobloggers, so I didn't really need to re-see their photos in a slide show. At one point someone in the audience (I think Dread Scott) was critical of the fact that the discussion had swung pretty hard from activism to money. I also found that dismaying. I'm also not really into the blog movement patting itself on the back and A-list kissing that is endemic in the blogosphere in general.

The best thing I took away was a pointer to this site by Mike the Satan's Laundromat guy to help deal with situations like last Sunday. 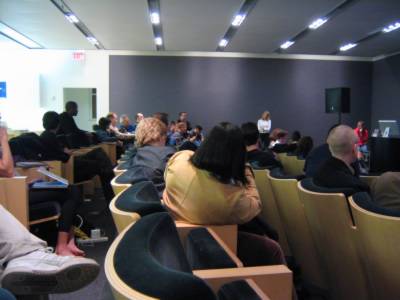 The subject of these photos in the woman way down there with the microphone. That's Susan Meiselas. She wasn't on the list of speakers, but they had her Kurdistan site up on the screen, so she must not have been a total surprise. 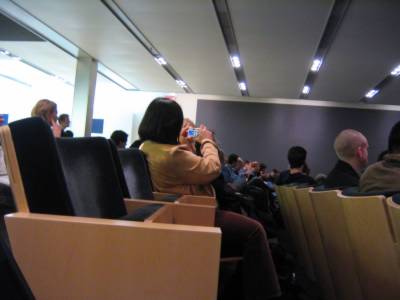 I have to find out how to deal with disparate lighting. I know the answer is a flash, but I hate the flash. I gotta find a book or something.