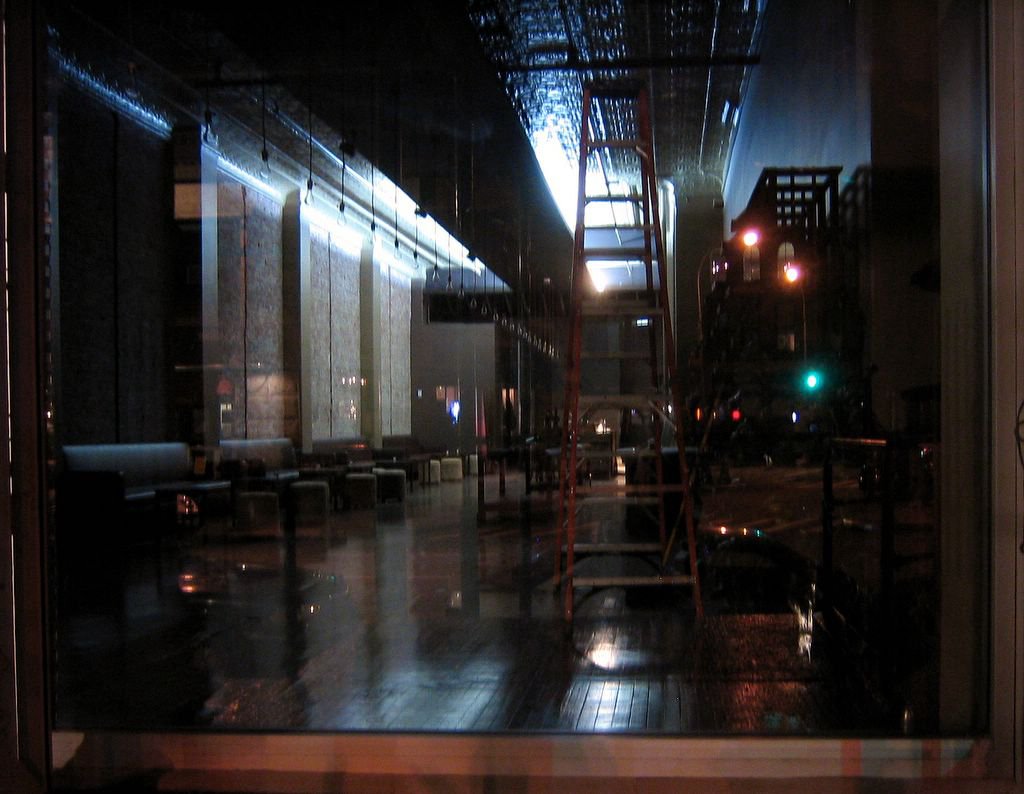 Darker earlier also means being able to look in more windows. Check out this loooong lounge going in next to Centrico on West Broadway. That looks like a big wine rack on the right wall.
Posted by Will at 12:38 AM

From the Real Deal:

"It's an excellent time to get into wine in the United States," said Jay Donayre, co-principal of the newly-opened VinoVino wine bar at 211 West Broadway in Tribeca. "The American palette is changing in good ways. The average American is not happy to just order merlot."

Donayre, along with his wife, Ashley, is a true oenophile but a fledgling retailer. Still, his enthusiasm – and detailed business plan – sold the landlords at 211 West Broadway on the merits of a wine bar to be combined with a comprehensively-stocked wine store.

That landlord, who had a prime retail space with high ceilings and no columns, was not looking for a bar tenant, said representative Mark Kapnick, senior director of Robert K. Futterman & Associates, LLC.

Especially not a bar tenant with no retail background.

"This was a start-up, and landlords are always concerned about start-ups," Kapnick said. "But the tenant came in with a very exciting business plan, and the landlord thought it was worthy to give them a shot."

Before bringing in the Donayres, Kapnick showed the space to supermodel Christy Turlington for a potential yoga clothing studio, along with some retailers in antiques and home furnishings. Art gallery owners also checked out the space.

With that level of competing interest, the landlord could have hiked up rents, as most landlords tend to do for nightclubs and bars. But Kapnick said that while the asking rent was over $80 a square foot, the rent agreed upon was on par with other retail rents in Tribeca, which range from $65 to $85 a foot.

Donayre said he chose Tribeca as a location because it already had some wine retail.

The rent for the 4,270-square-foot space, in which about 1,650 square feet is usable for retail (the bar will use 942 square feet, the store another 700) is about 15 to 20 percent of anticipated net profit, Donayre said.

That return is about a third of what Donayre expects to reap from the wine store portion of his shop. But he is convinced that a wine bar, where he will hold tastings and educational events, is a necessary complement to the store.

"Our landlord is a big fan of the concept," he said. "He sees this as an improvement to the neighborhood and the surrounding area."