something I actually did do

Caught WetNurse at the Knitting Factory this past weekend. Sorry, no pictures, I travelled light. They rocked. Real smart music. There are so many names for the variations of heavy metal, that I'm sure this kind has a name. What do you call it when the singer isn't afraid to stop singing so the band can play a bit? And the band plays tight "parts." There are probably music terms for "parts" but in bands where no one speaks that language, one might hear, "Play the fast part six times, and then the mosh part." And if you're in a band like WetNurse, they might say (I don't actually know what these guys say, I'm just saying what they might say), "Verse, chorus, then the tickatickticka part, then guitar solo, then the bongdiggabongdiggabongdigga part..." like that.

When the band does it nice and tight, it's like watching fireworks (with your ears). 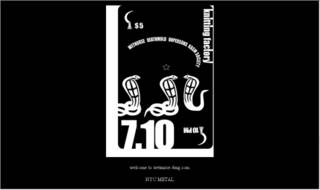 The Voice called the singing schizophrenic, but that's how they all sing now, with some version of traditional singing on the verse (in this case usually falsetto) and hoarse woofing through the chorus (or vice versa). By far, my favorite person singng that style is Karyn Crisis. Crisis isn't really a "parts" band, but if you want your ass kicked, check that girl out.

Hey, one other note, in case you're going to the Tap Room at the KF for something. It's not a bad room (and when you're paying 5 bucks for a show you can't really complain about anything). There's no stage really, the bands just play over in the corner. That wasn't a problem for this show.

What did strike me was that I was paying $9 for Maker's Mark, and everyone else was taking advantage of the $3 beer special. So pay attention.