The front(s) that's been coming/converging all week is moving up the coast, not really out to sea. Clearly the temperature of the ocean is such that it's holding the weather a little bit off the coast (or at least it did for most of today). So they forecast the weather as being rain and even go so far as to warn about floods because nothern jersey really is going to get rain. But here in the city, no rain all day.

The shot below is a pretty good example of what I'm talking about. Right now, it's quiet in the city (or at least, this part of the city) but looking at the radar, it's raining like holy wrath in North and West Jersey.

I know, you're saying NY1's weather is better, but I don't believe it. I think they all subscribe to the same weather service and no one bothers to look out the window.

What we really need, and it probably alreayd exists and I just don't know about it yet, is for one of the local universities to do some really local forecasting that genuinely takes into account the fact that the city is hollow and heated, so the air over the city behaves differently. And the ocean is one temperature and the Hudson is another temperature, and the harbor is yet another temperature and all of it has an impact on the weather of the city. I bet all these tall buildings have an impact on wind and atmospheric pressure too. Somewhere someone is doing all that math and making more accurate weather predictions. If you know who, send me a mail.

In the meantime, I'll be watching the radar and doing my own guessing. 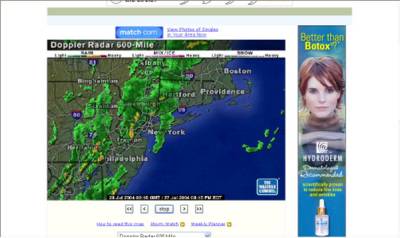