As I promised earlier in the week, I went to see what I could see regarding the new WTC cornerstone today.

First I went up the Vesey Street pedestrian bridge. There was a small gaggle of tourists at the top of the stairs. I'm not sure how many of them were trying to see the stone and how many just wanted to look into the hole. Here's what you see from there: 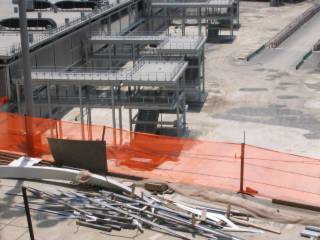 It's almost like they didn't want anyone to see the cornerstone because they put up that orange screen that's just tall enough to block the view of the stone.

I didn't try all the views from all the way around the site, but I believe the NYTimes reporter who said that was the only place to see it. You'd have to be up pretty high to get the angle right from any other place around the site.

Next I went downstairs in the PATH station. I should point out that on the way down (at the subway level) there was a tourist with a video camera getting yelled at by a security guard for taping the view of the north side wall, so they're not too crazy about taking photos down there.

To see anything I had to go through the turnstyle (you can use your pay-to-play metro card) and onto the platform on the end. Unfortunately, you can still only see it through a screen, and even then, you're looking at the rough side, not the side with the inscription: 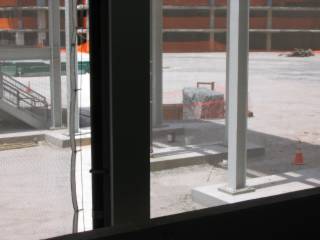 But, as I speculated, if you actually got on an outbound train like the one in the picture below, and took the short trip to NJ, the track clearly turns in such a way as to provide a good view of the good side of the stone. 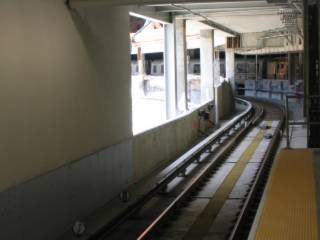 Maybe this winter when the bike is in storage and I'm back to commuting on the PATH (and if there's been no further construction progress) I'll get that shot as well.