When the circus leaves 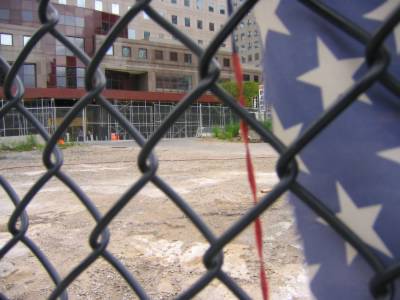 This is really part of my Tribute in Light series since I did day shots and night shots. This is an "after" shot.

The shot itself might be a little over-dramatic with the tattered flag and bleak lot. That's not really a statement I was trying to make. In fact, my real goal with this shot was to try to duplicate something I saw at the top of the Battery Park City Broadsheet (I don't think they have a Web site, sorry, locals only).

They took this same photo, but they put the camera up next to the names and put the people in the background, which I think worked a whole lot better. So I when I first framed this shot from the other side of the lot I thought the flag made an interesting focus. Instead I walked around the other side and tried that trick. It worked pretty well I think.