I tried to get all of yesterday's photos up with a T Mobile wifi connection at a Starbucks, but for some reason the upload time was super slow so I didn't get them all up before my battery died. I hope to catch up some time tomorrow though. 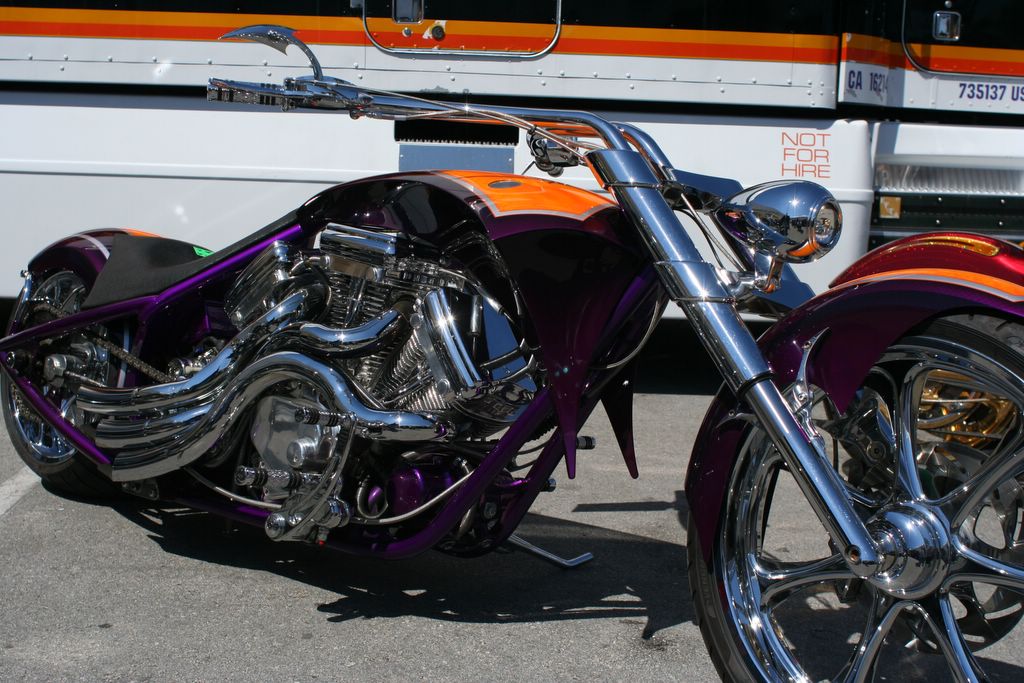 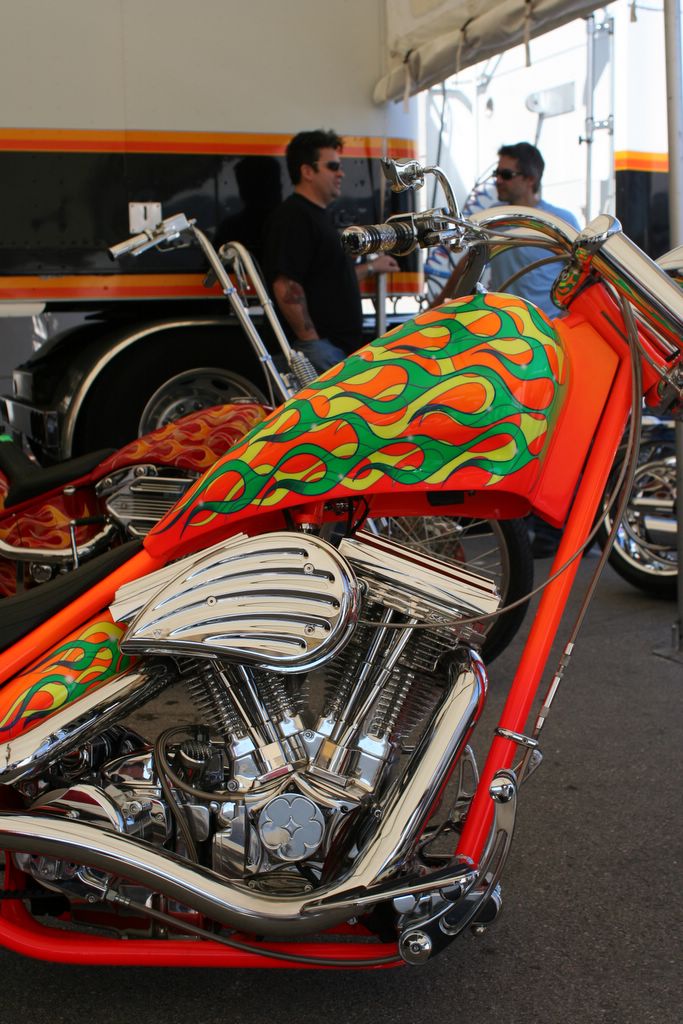 I thought that was Corey Ness in the background, but it isn't, so it's a picture of some flashy paint instead. 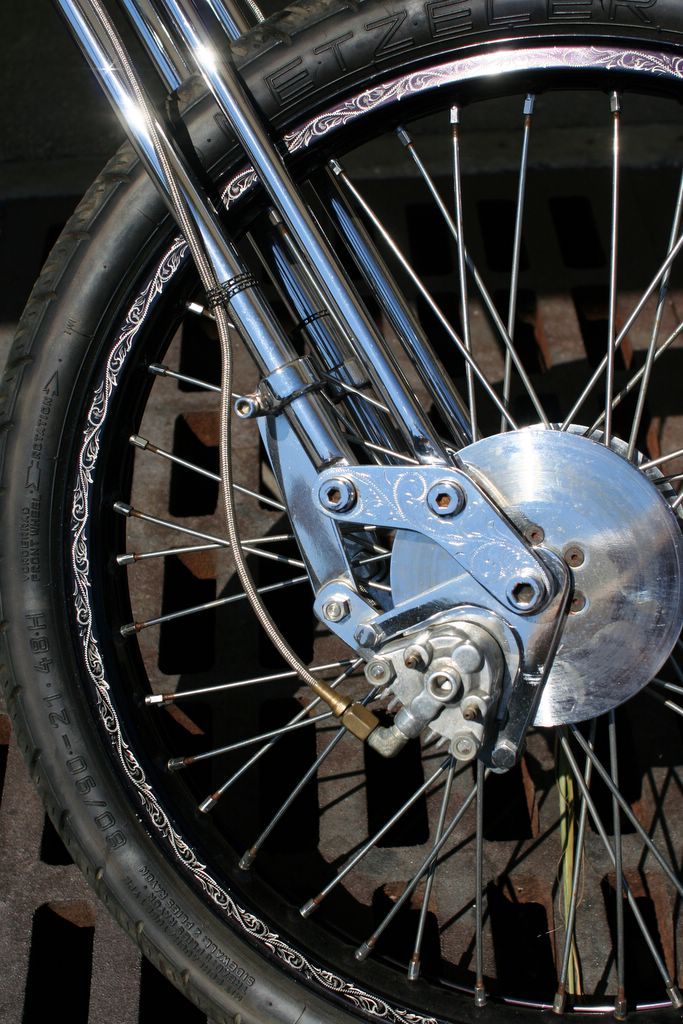 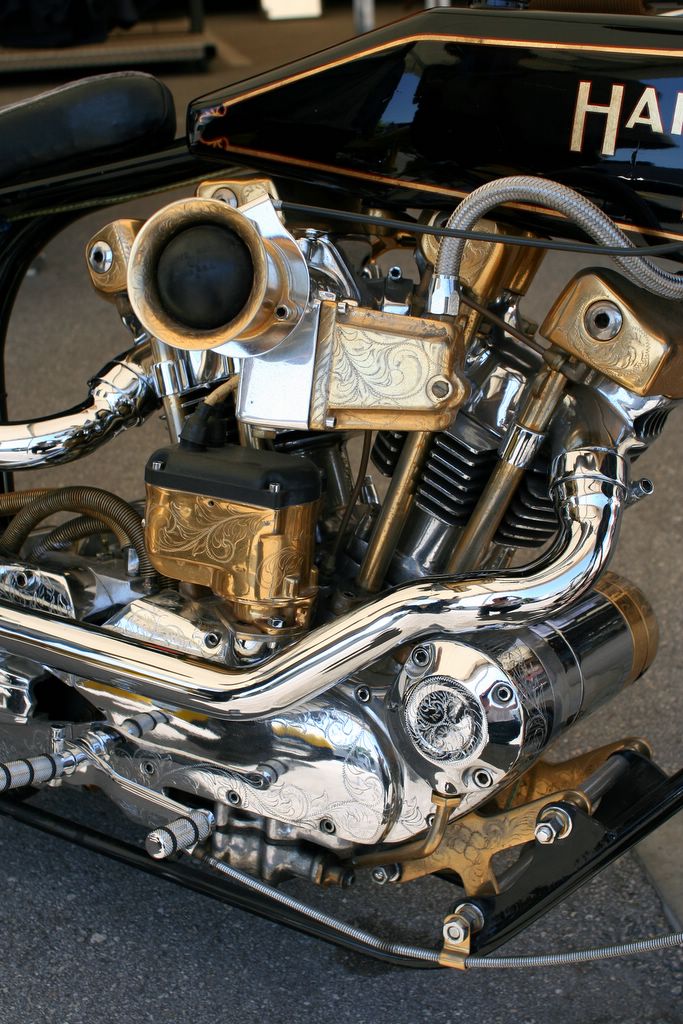 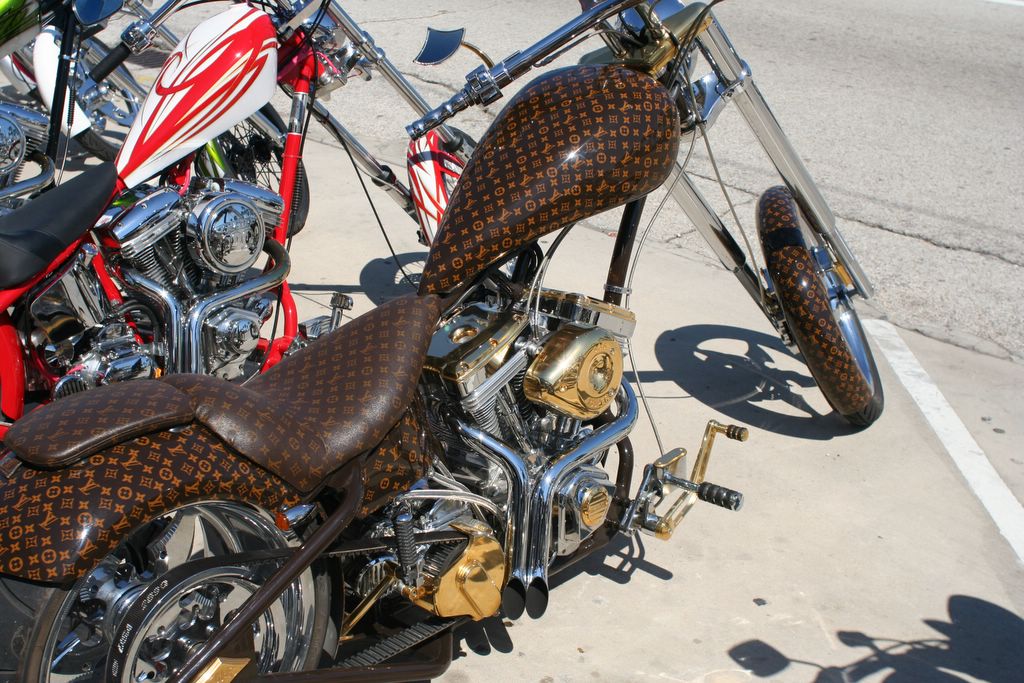 What's the deal with this motif? It seems strange to me that so many motorheads would make this joke. 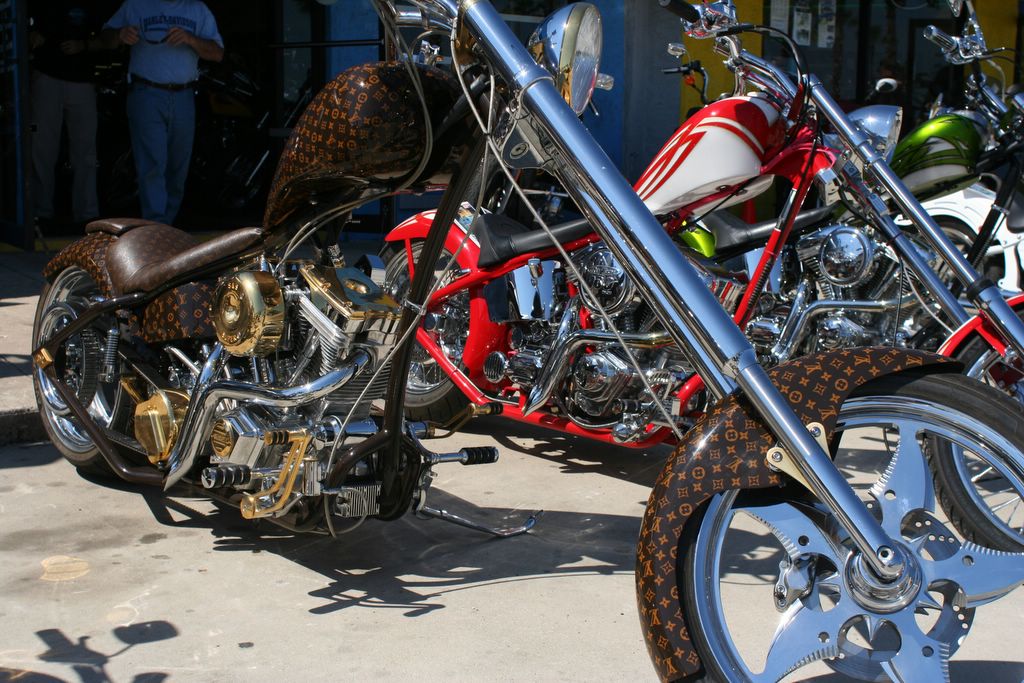 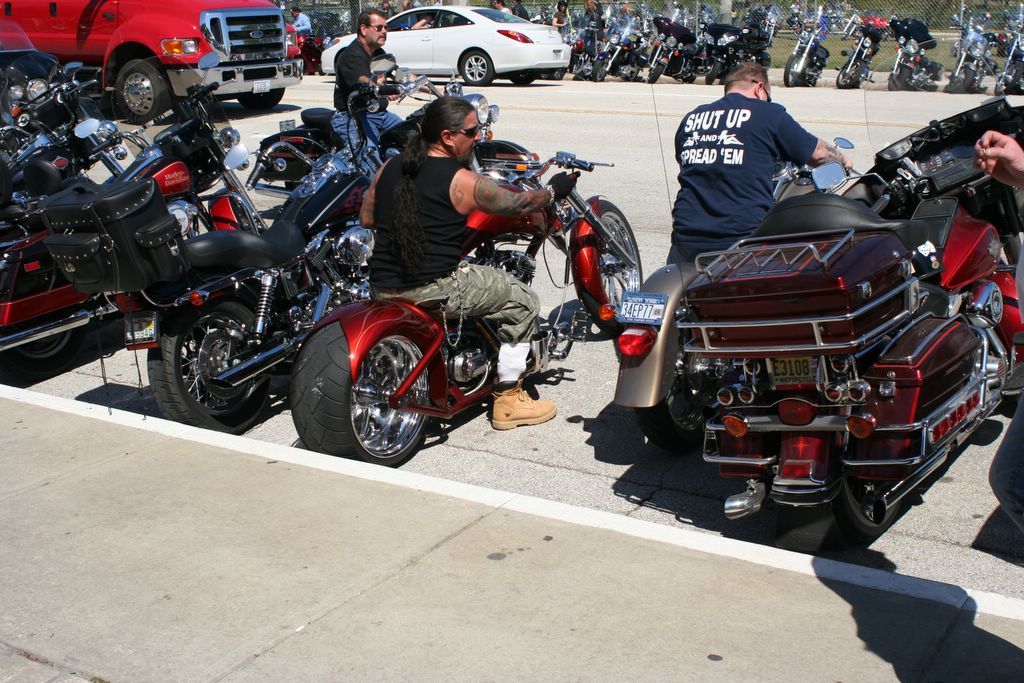 Part of appreciating a custom bike is imagining how (or whether) it's possible to ride it. In this case one might have wondered how to deal with up-pointing exhaust so close to the foot rest. Answer: tuck your pants in your sock. 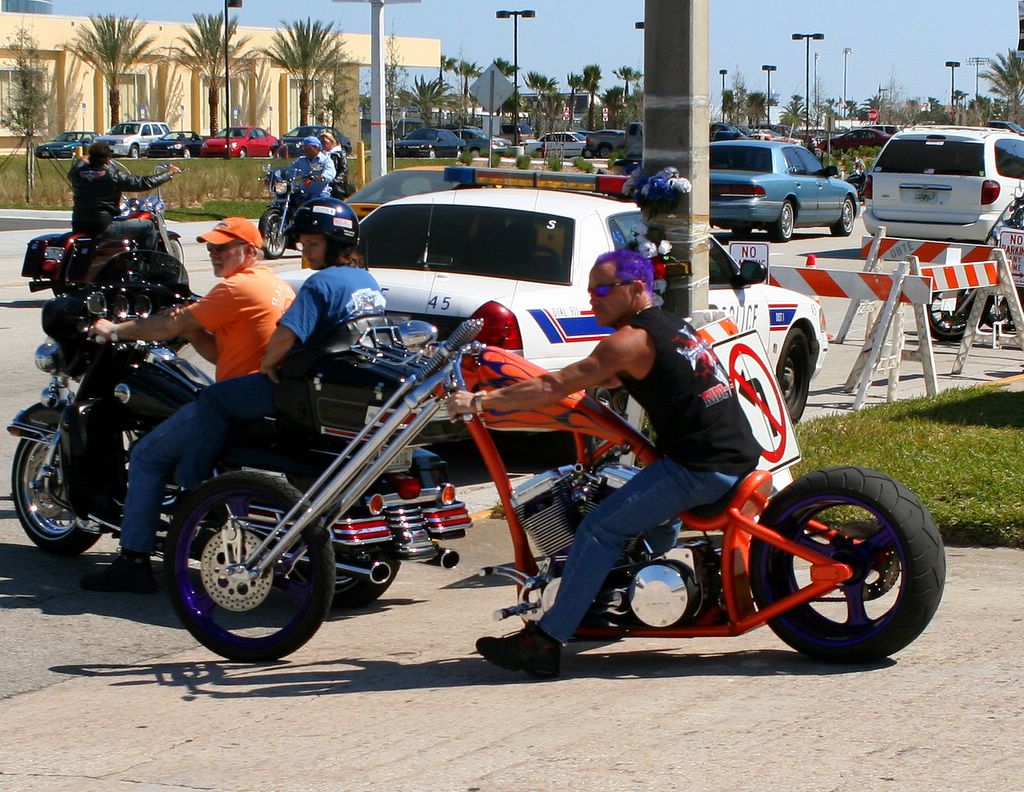 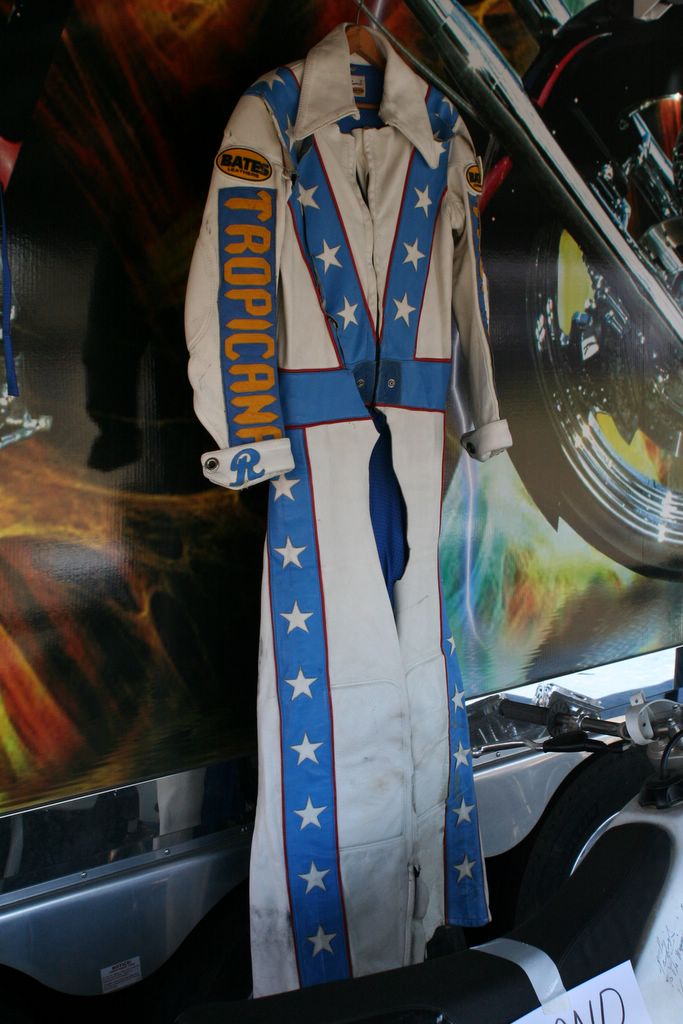 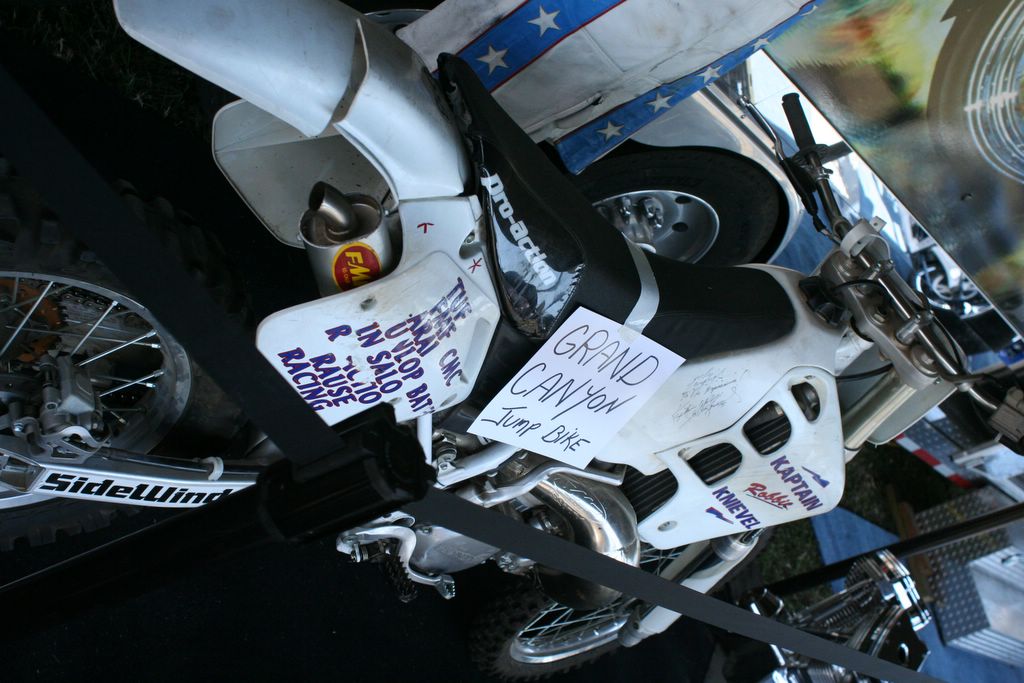 And the canyon jump bike. 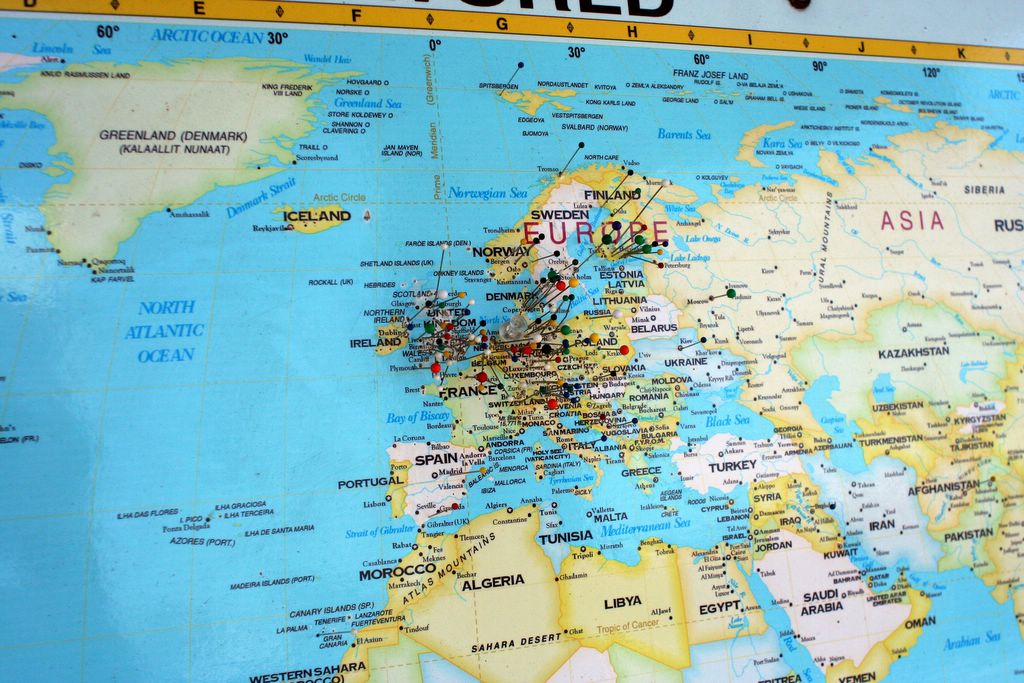 Maybe I just never noticed, but it seems like there are a lot of Europeans at bike week this year. A lot of foreign languages overheard on the sidewalks. 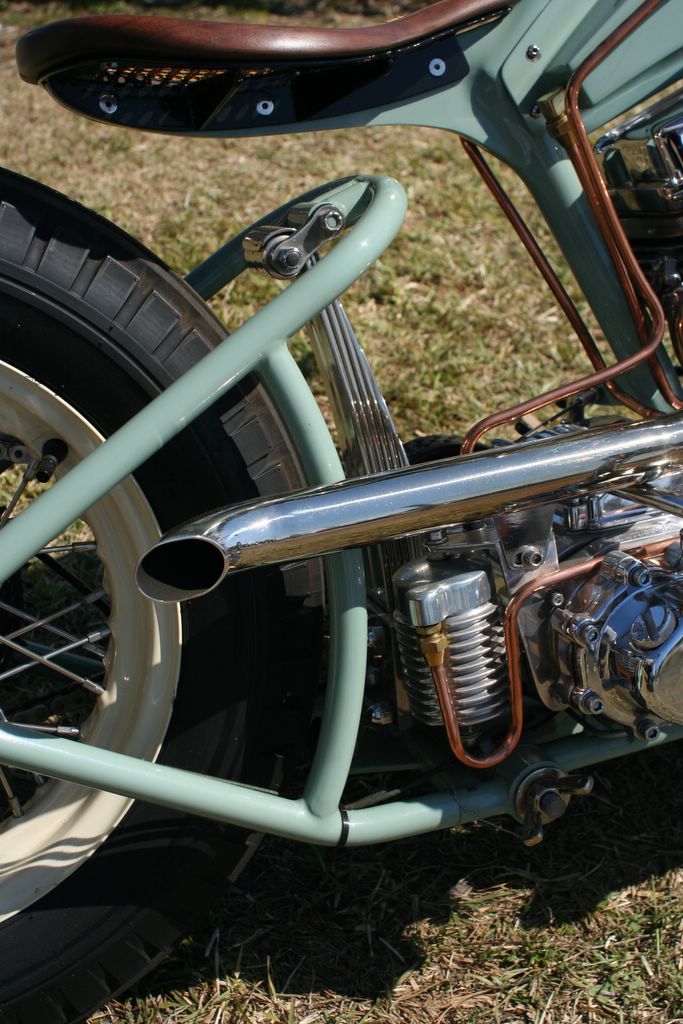 In the backlash against the fat tire trend, a lot of bike builders have been incorporating retro features in their bikes. The next three are from a shop called Young Choppers.
What stood out to me is that a few of the bikes have leaf spring suspension either in the back or the front. 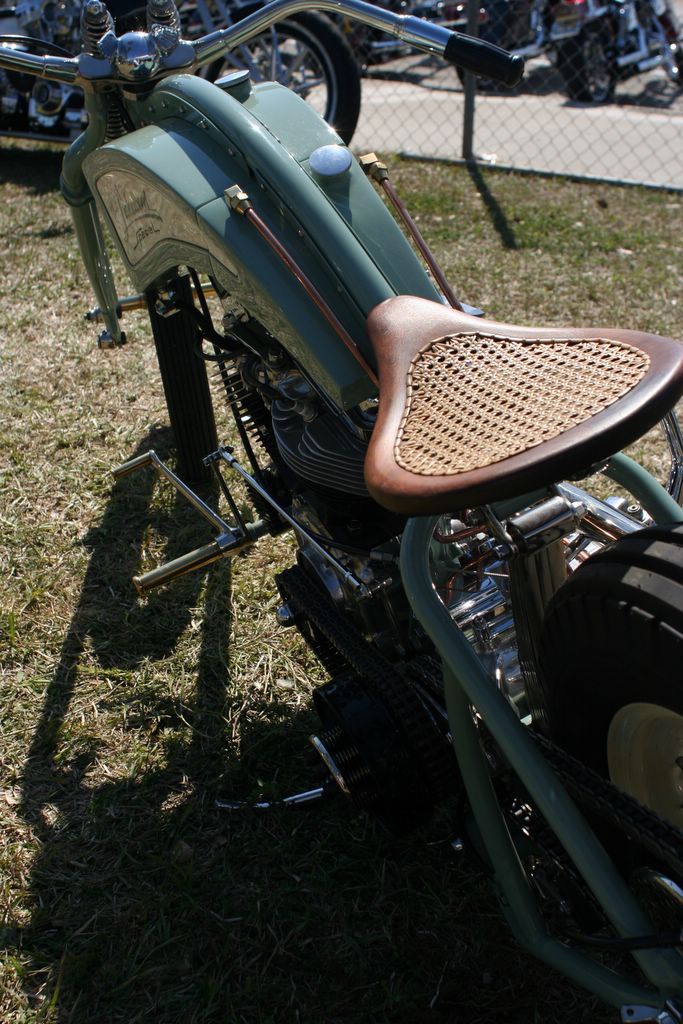 Note that the oil tank question I mentioned the other day is solved here by blending it into the back end of the gas tank (those copper colored hoses are the oil lines). 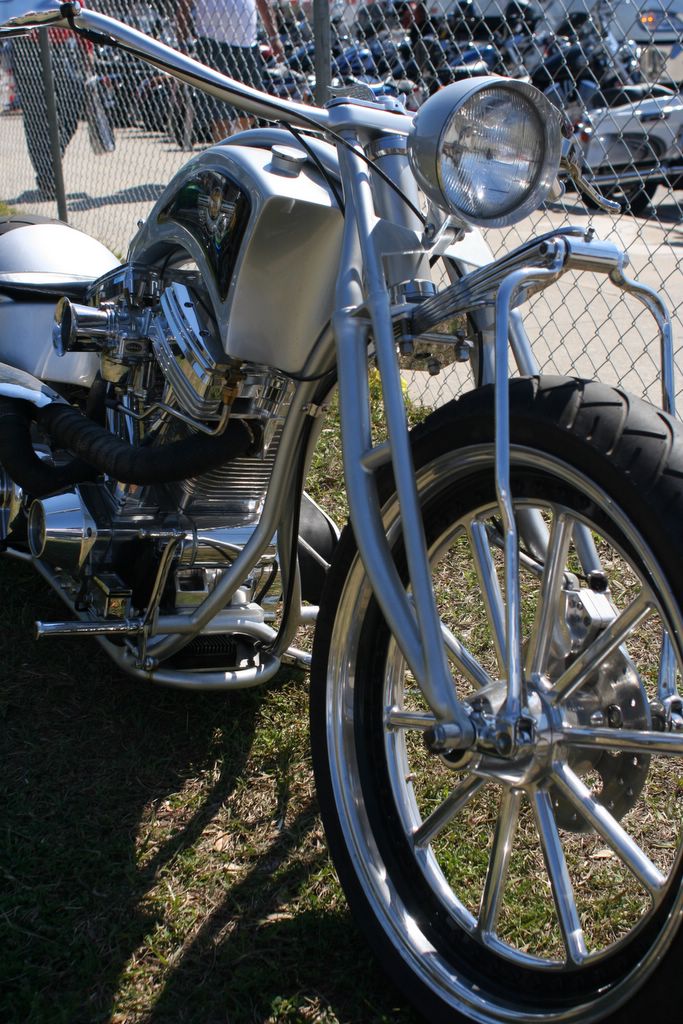 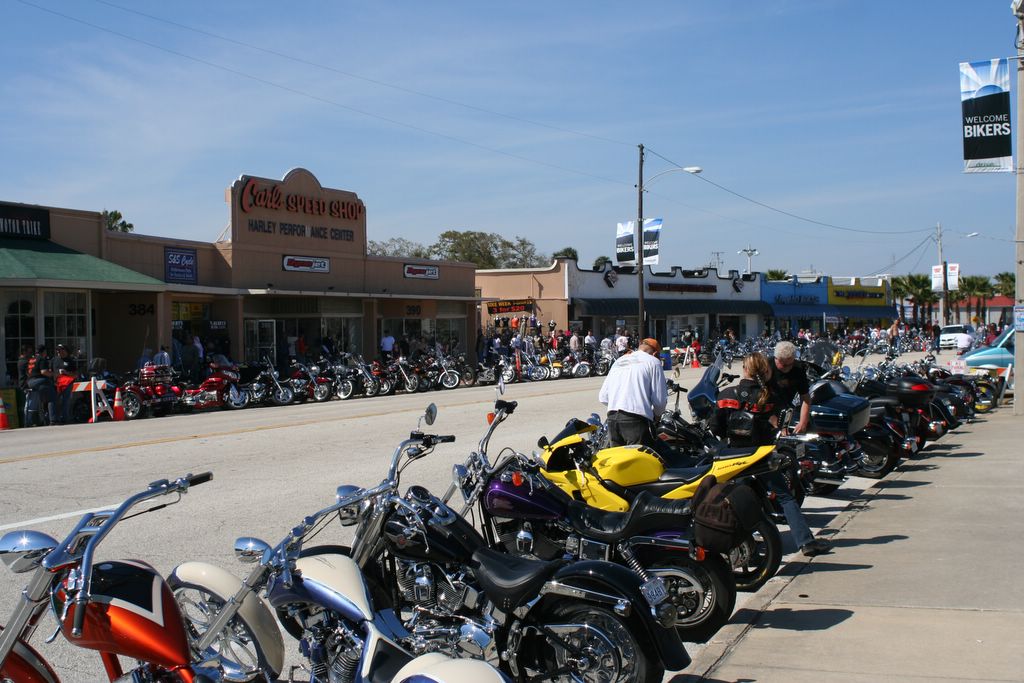 Beach Street. Much quieter this year with so many of the venders and attractions moved out to the new dealership. 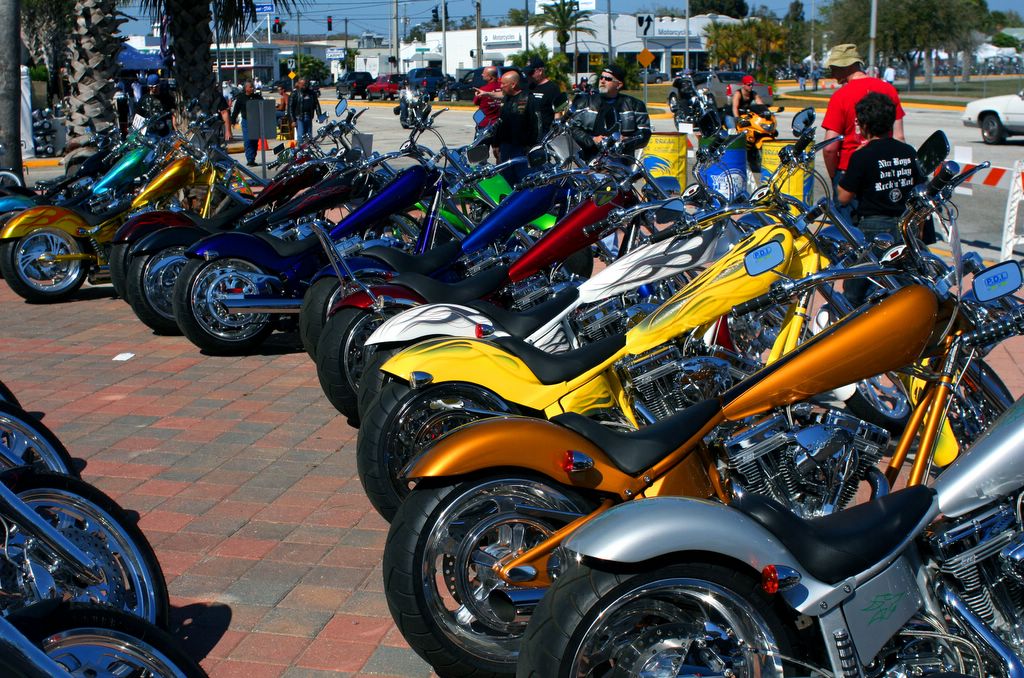 These bikes are for sale, so it's not coincidence that they're assembled this way, but I still like all the colors. 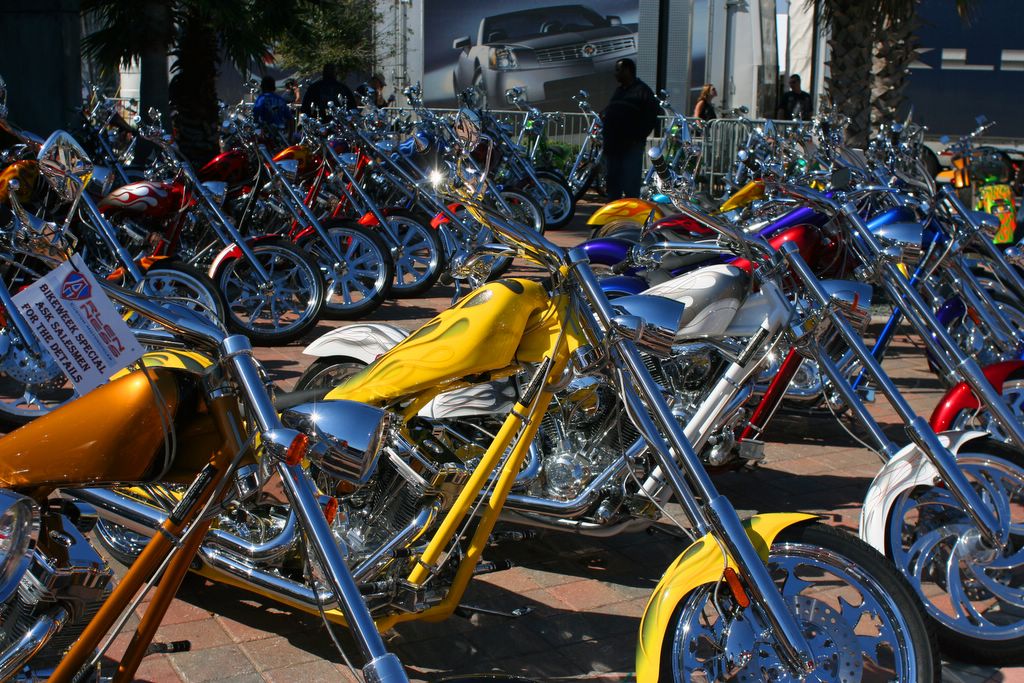 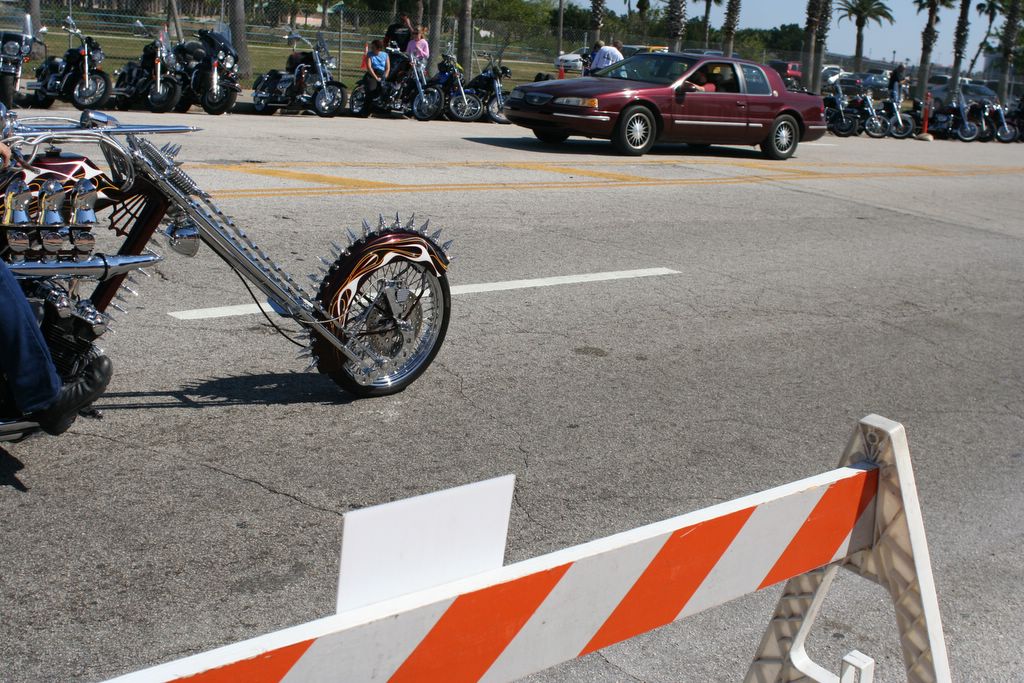 OK, so I missed this guy. I heard him pass behind me and everyone turned to look and I just held up the camera and snapped. You can imagine what the rest of the bike looked like given all the spikes on that front fender. 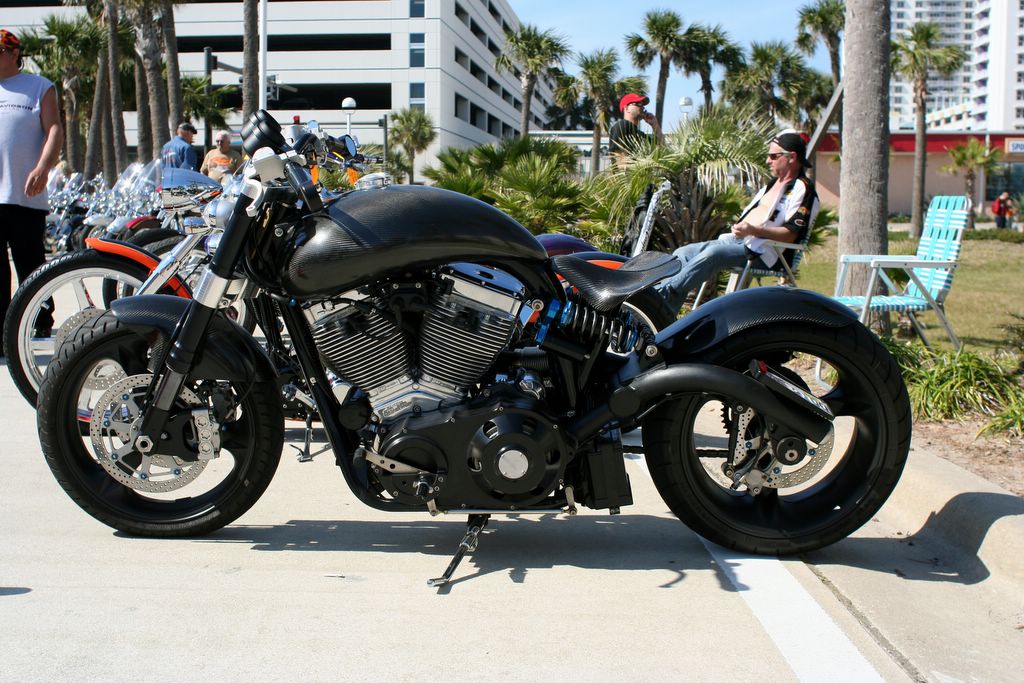 The Confederate Hellcat remains my "if I win the lottery" bike. (Speaking of oil tank solutions, Confederate puts the oil in the frame tube.) 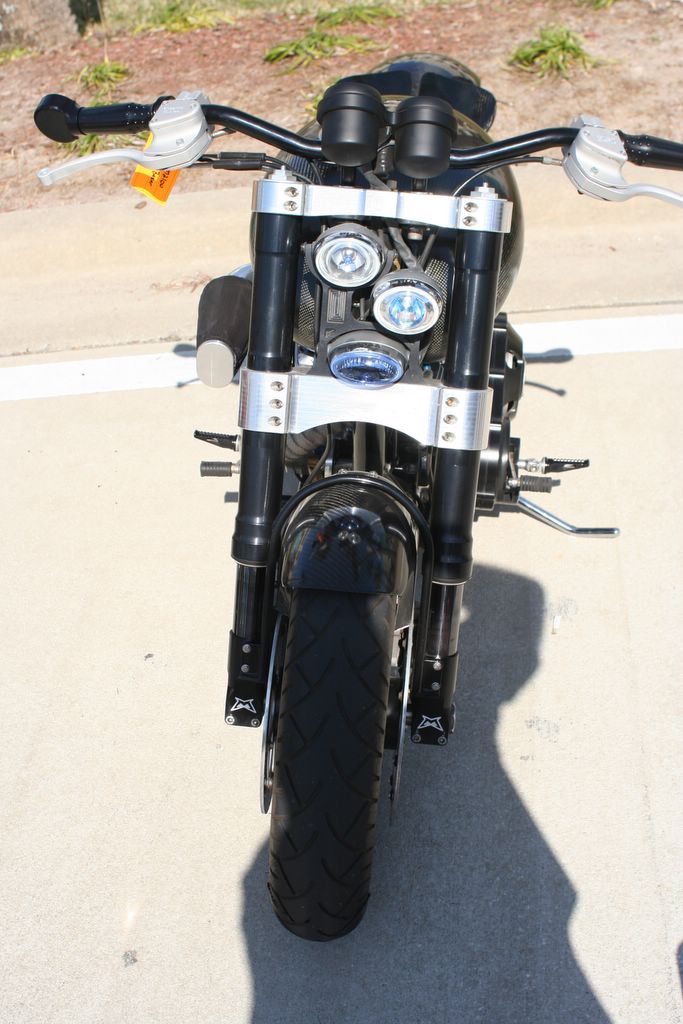 I love the idea of three independent headlights. 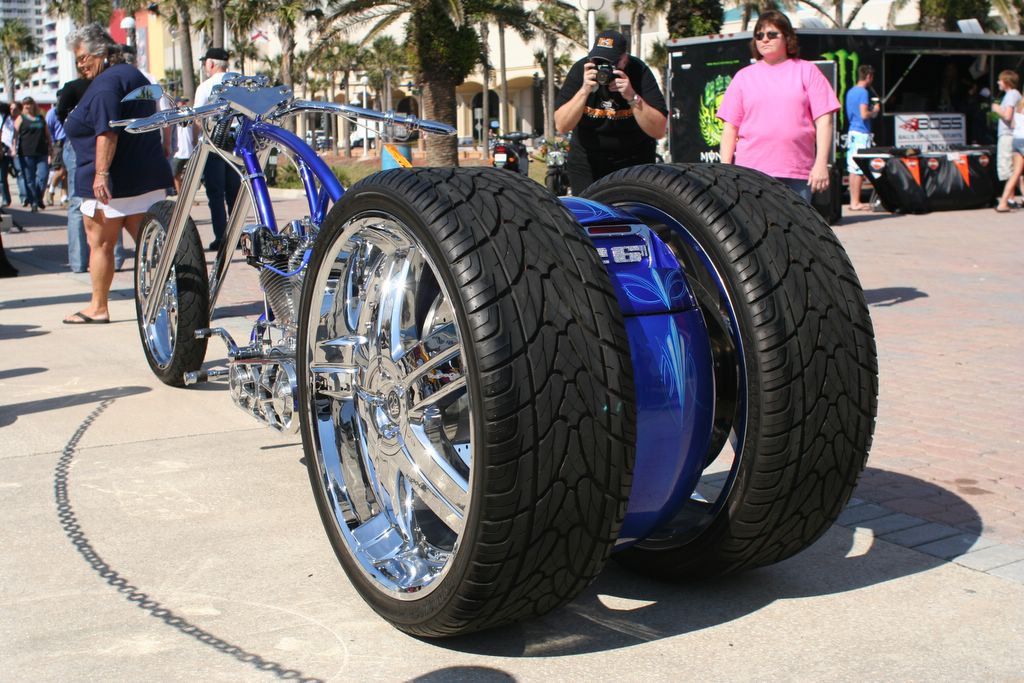 I was only able to upload some of the entries from this particular contest. Others will go up tomorrow. That number on the back fender says 26". These wheels are huge. I can't imagine how this feels to turn. 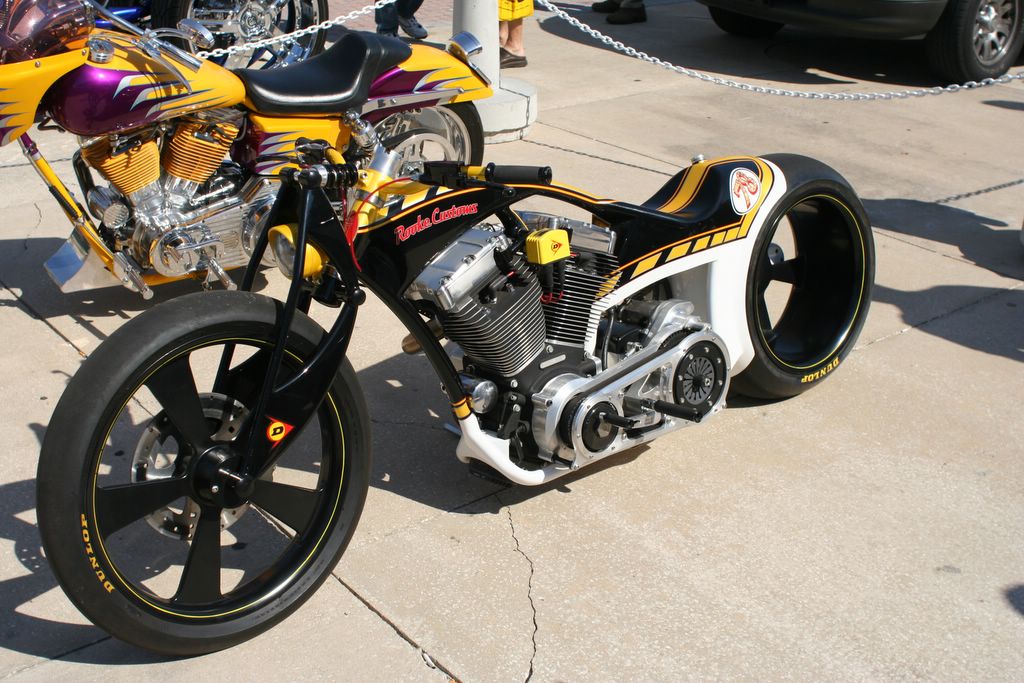 This is the Jesse Rook entry. 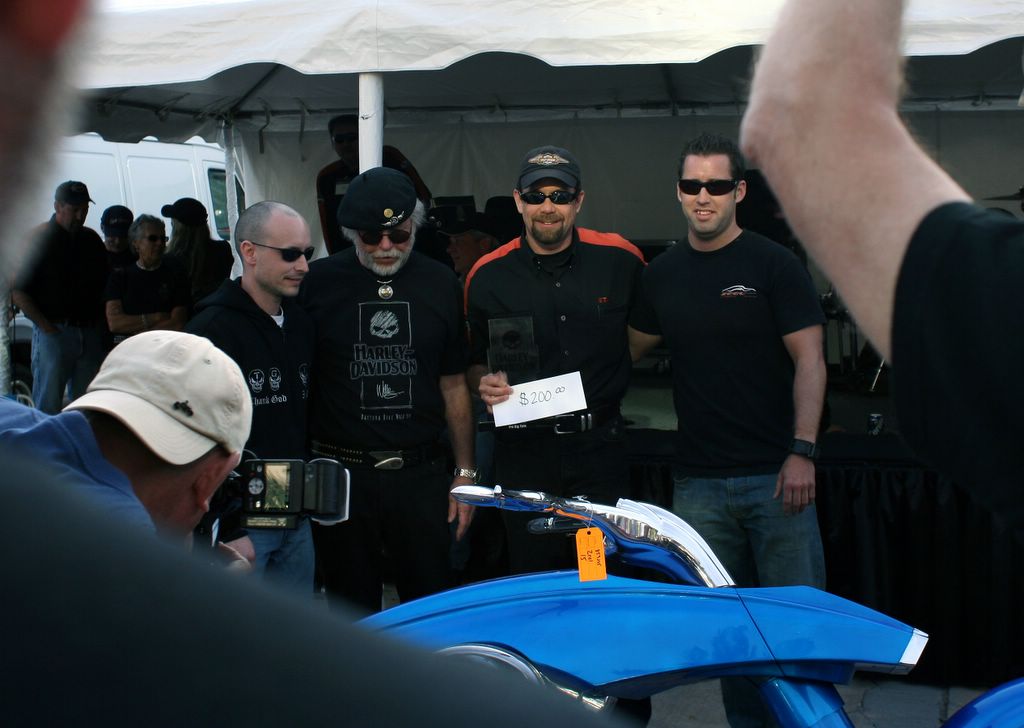 I think this is the overall winner of the Harley Ride-In Show. I didn't catch the name, but we'll find out in the bike magazines in a few months. By the way, that's Willie G and Bill Davidson. I have a better Willie G shot for a celebrity sighting entry next time I get near some wifi. (Also got an autographed t-shirt, thank you very much.)
Some ride-in show and other Daytona coverage here.